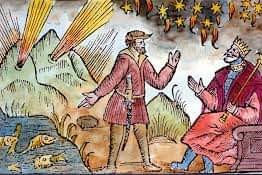 Alternatively known as Ichyomancy, Icthiomancy, Icthyomancy, Ichthyonomancy, Ichthyomancie, and Ichthyomantia. Derived from the Greek ikhthus (‘fish’) and manteia (‘divination’), this is an ancient system of divination that draws omens from the observation of fish appearance and behavior (a form of Aruspicy), and also by interpreting fish entrails and their heads characteristics (a form of Augury). One of the most common methods of Ichthyomancy is by watching the way a fish behaves when it is placed in a consecrated pool, aquarium or bowl. Tiresias, the blind prophet of Thebes, and Polydamas, lieutenant and friend of Hector during the Trojan War, are said to have been practitioners of Ichthyomancy. This type of divination was a popular practice in ancient Babylon, China, Greece and Phoenicia.